icrovascular fluid exchange (flow Jv) underlies plasma/interstitial fluid (ISF) balance and oedematous swelling. The traditional form of Starlingâ€™s principle has to be modified in light of insights into the role of ISF pressures and the recognition of the glycocalyx as the semipermeable layer of endothelium. Sum-of-forces evidence and direct observations show that microvascular absorption is transient in most tissues; slight filtration prevails in the steady state, even in venules. This is due in part to the inverse relation between filtration rate and ISF plasma protein concentration; ISF colloid osmotic pressure (COP) rises as Jv falls. In some specialized regions (e.g. kidney, intestinal mucosa), fluid absorption is sustained by local epithelial secretions, which flush interstitial plasma proteins into the lymphatic system. The low rate of filtration and lymph formation in most tissues can be explained by standing plasma protein gradients within the intercellular cleft of continuous capillaries (glycocalyx model) and around fenestrations. Narrow breaks in the junctional strands of the cleft create high local outward fluid velocities, which cause a disequilibrium between the subglycocalyx space COP and ISF COP. Recent experiments confirm that the effect of ISF COP on Jv is much less than predicted by the conventional Starling principle, in agreement with modern models. Using a two-pore system model, we also explore how relatively small increases in large pore numbers dramatically increase Jv during acute inflammation. 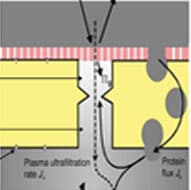 The plasma, interstitial fluid (ISF), and lymph compartments are linked in series and, in the steady state, fluid flows continuously from one compartment to the next. Lymph drains back into the circulation chiefly at the major veins at the base of the neck. Accidental lymphatic fistulae in the neck indicate a total post-nodal lymph flow of up to 4 L/ day in humans. Later work revealed that roughly half the fluid content of afferent lymph can be absorbed by lymph node microvessels,1,2 raising the fluid turnover estimate to !8 L/day.3 This is a considerable fluid turnover; since human plasma volume is only !3 L, the entire plasma volume (except the proteins) leaves the circulation approximately once every 9 h.

Substantial fluid movements between the plasma and interstitium account for the rapid swelling of acutely inflamed tissues (minutes), and for the oedematous swelling of venous thrombosis, cardiac failure, and lymphatic failure over hours to days. Conversely, haemodilution following an acute haemorrhage reveals a rapid absorption of ISF into the blood stream (!0.5 L in 15â€“30 min). Acute fluid transfers are important medically, because lasma volume is a majordeterminant of the cardiac filling pressure and thus cardiac output (Starlingâ€™s â€˜law of the heartâ€™).